Macca mania has hit the streets of Mexico City! Paul McCartney's forthcoming show at the Foro Sol Stadium on Thursday May 27th is set to be a wild night. The people of Mexico have made it clear to their musical hero that they are desperate to see him and can't wait to be rocked. Tickets for the 60,000 capacity stadium sold out in literally a matter of minutes, setting a brand new record! In fact sources at Ticketmaster Mexico think the tickets could have gone even faster but the technology couldn’t support the overwhelming demand!

When John met Paul and George

Posted by Webmusher at 6:23 AM No comments: 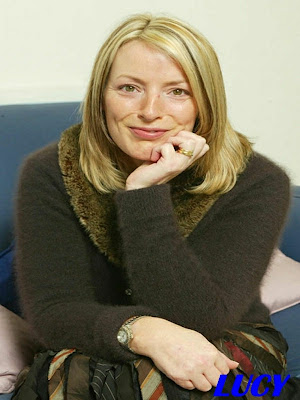 Ross Vodden and the O'Donnell family regretfully have to announce the sad passing of their beloved Lucy aged 46, after an incredibly brave fight against lupus.

Lucy was the childhood friend of Julian Lennon and the inspiration for the Beatles' 1967 psychedelic classic "Lucy in the Sky with Diamonds".

Julian and Lucy were linked together by something that happened more than 40 years ago when Julian brought home a drawing from school and told his father, "That's Lucy in the sky with diamonds."

She added "I am sure that many people will wish to pass on their support to Lucy's family and they can do so via the St. Thomas Lupus Trust by e-mailing fundraising@lupus.org.uk."

Lucy Vodden was at nursery school in Weybridge with John Lennon's son Julian, who one day took home a drawing of a girl surrounded by stars.

When John asked him to describe he said, "It's Lucy in the sky with diamonds"

Posted by Webmusher at 2:56 AM No comments:

Also includes a DVD of all 13 mini-documentaries (Running time: 40 minutes)

Who could have ever thought it would have been possible? 09/09/09 has become a red-letter date in the history of Beatle-dom. It could be the repetitive nature of the phrase "Number Nine, Number Nine" featured in the track "Revolution 9" from "The White Album". Or, even the bit of dialogue "dial 9-9-9" from the 1965 motion picture "Help!" However, 09/09/09 has become important for a far better reason.

After more than 22 years of having The Beatles' albums on CD, we are finally treated to the definitive box set of Beatles music. This time, the folks at EMI and Apple finally got things right for a change. While having Beatles CDs is a thrill, it is now even more-so with this brilliant audio collection. For the very first time, their entire recorded output has been remastered for the 21st century, complete with unique liner notes and special digipak-packaging to boot. With the exception of the "Past Masters" set, each disc also contains a brief mini-documentary about that album. These short bits can only be utilised with the assistance of a computer's disc drive. However, the box set does include a bonus DVD disc featuring all of these short sequences together so you can enjoy it on your very own DVD player. What you have here are the original British Beatles albums just like what had been released before; only now, the listener can enjoy the first 4 albums - "Please Please Me". "With The Beatles", "A Hard Day's Night", "Beatles For Sale" - available in true stereo for the very first time. Combined with the remaining 9 albums recorded by the group between 1965 and 1970, this is a masterpiece set, and a special treasure trove of timeless, classic songs that changed the entire structure of popular music as we know it today.

Each CD is carefully and painstakingly put together in a very special 3-border fold-out, which allows the CD to be housed in a slot on the far right-hand side (except for the double discs, which have their CDs fitted inside the packaging). Each title also comes with a special CD booklet containg many unreleased photographs that represent the time when each album was originally released, plus well-written liner notes (including the original notes from the first 4 albums). The "Yellow Submarine" booklet contains both the original UK and US back cover notes together for the very first time. And, what a thrill it is to finally be able to have the photo/comic-strip booklet from "Magical Mystery Tour", that was initially issued in the American LP in 1967, in an official CD release for the very first time. The "White Album" packaging includes the original poster, in a CD sized reproduction, that features the photo collage on one side, and the album's song-lyrics on the other side. This marks the second time that this poster was made available in a "White Album" CD release, following the 30th anniversary reissue from 1998.

The sound quality of the songs are, without a doubt, the very best that I have ever heard before. For the first time, the audio quality of each track is sharp, crisp, crystal clear and truly an audiophile's dream come true. It should also be noted that the songs "Love Me Do" (both versions), "P.S. I Love You", "Only A Northern Song", "She Loves You", "I'll Get You" and "You Know My Name (Look Up The Number)" are all presented in their original monaural mixes, whereas the remaining songs are all in true stereo. Even "I Am The Walrus" still has its orignal mix of half-stereo/half-duophonic, just like the first time around. All in all, this box set far surpasses all other box sets that have come before.

And, the bonus DVD of the mini documentaries is also well-produced. Each segment features audio comments from The Beatles themselves along with George Martin. This DVD gives a fascinating insight into why these classic albums have stood the test of time so well, and continue to be so popular, even into the 21st century.

Many current and legendary artists have called The Beatles a major influence. One listen to this music and you too will see why. Beatlemania will live on forever!

Posted by Webmusher at 2:07 AM No comments:

*note: Yellow Submarine, Abbey Road and Let It Be are not included, as they were originally recorded in stereo
Posted by Webmusher at 2:06 AM No comments:

Posted by Webmusher at 1:13 AM No comments:

Posted by Webmusher at 1:08 AM No comments: